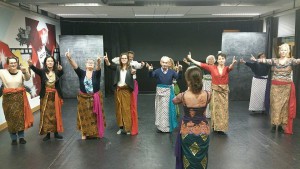 The Pasar Malam has been well received, by great enthusiasm from the organizing lecturers, the parents and the students themselves. Even for the INYS, the event has exceeded its expectations! The day started with a pre-event workshop given by Anouk Wilke, one of our talented friends who taught 11 students a Balinese dance. The students, who learned the dance in only one and a half hour, opened the Pasar Malam with a performance of the dance, leaving flabbergasted parents curious for the rest of the night.

Students from the Haarlemmermeerlyceum explained the purpose of the Pasar Malam, next to having fun, followed by a speech from the school director. It was especially nice to hear how young Dutch students are very excited to go to Indonesia, with the intention to personally develop and experience a different culture, while contributing to the local community. The INYS was also offered some room to explain more about its activities and so INYS-NL Chair Dimple Sokartara held a short speech. After a brief introduction about our foundation, a more elaborated story about Project Child was given by Dimple as well. The attaché of culture and education from the Republic of Indonesia in the Netherlands, Prof. Dr. Ir. Bambang Hari Wibisono, also attended the Pasar Malam and held a speech about the importance of intercultural understanding amongst other subjects.

Twenty bright, motivated and foremost talented students from the Sekolah Indonesia The Netherlands in The Hague enlightened the audience with an Angklung performance. Everybody got so excited that the angklung workshop, which was given after the performance, was visited by a great amount of people. The teacher from Sekolah Indonesia gave every participant an angklung, and together they were able to compose numerous songs guided by the teacher and the students. Next to the angklung workshop, Anouk also offered a Balinese dance workshop. Parents who saw the performance at the beginning of the event were thrilled to hear that they could learn it themselves. The key word to both of the workshops was most definitely: FUN!

All in all, it had been a successful event with efforts from the school as wel as INYS. For INYS, it was the first time to be engaged in such an activity. Seeing the extremely positive results, and feedback, it would be something worth repetition. After all, bringing together the Dutch and Indonesian youth is INYS’s main goal, through any creative opportunity.

A new experience, with great results, hopefully to be repeated in a sustainable method, in order to bridge Indonesia and the Netherlands!