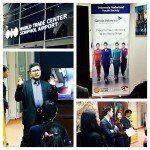 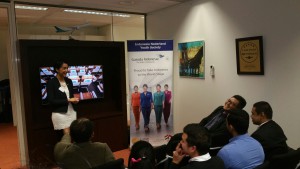 After a brief introduction by INYS Chair Dimple Sokartara, Garuda’s General Manager initiated his speech with Assalamu alaikum (may peace be upon you). He explained why he started with such a ‘original’ greeting, elaborating on the fact that it is something different, which is exactly how Garuda would like to position itself in a market where there is a high competition level. Mr. Ediono continued by informing the crowd about his personal career path, leading to his current position as the General Manager of Garuda Indonesia in the Netherlands. He emphasized that even with his wide range of experience, he is not all-knowing in the branche, nor will anyone ever be since it an industry that develops by every external development that will be made. An example he gave was that if technology will develop, the demand for technological developments are also clearly shown from the end-consumer, in this case the passengers. 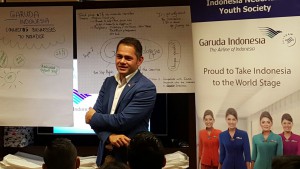 The participants of the events where then split in two groups of six people, each group following either Mr. Wouters or Mr. Silalahi. During these ‘break out’ sessions, the participants were given the opportunity to listen to introductions of the managers, followed by a more detailed description of their function within the company. As the participants were already informed, they would have to come up with a pitch later at the event. Therefore, this first session was also a chance for the participants to ask more in depth questions to the managers concerning Garuda’s current branding strategies. After a short coffee break, the groups were reshuffled and given the opportunity to sit with the managers they did not sat with yet. In this second session, both groups were more focused on brainstorming to come up with an idea they had to present afterwards. As the participants all had different backgrounds, these were very interesting sessions where many different types of ideas came across. 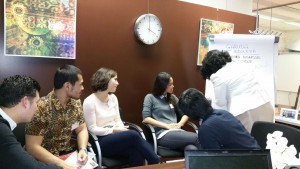 At the end of this event, both groups were given the floor to share their ideas with the entire crowd. The first group suggested to focus on business travellers with a special app that could be link to their employing company and make travelling easier for them. The second group came up with an idea to focus on the next generation travellers which are the young, backpacking, not-so-much-to-spend type of travellers. Both ideas were very interesting, yet critically reviewed by the participants. This sparked lots of attention for both the marketing and finance managers, as both need to match in order to create a grand strategy. The event was closed with the announcement of the winning group, followed by an informal networking opportunity combined with some drinks and small snacks, including homemade lemper and wraps!

With another event that created a platform for the leaders of today to meet the leaders of tomorrow, we have seen how many ideas can be created when these two are combined. We hope that all parties have experienced this event positively and something sustainable for their personal development.