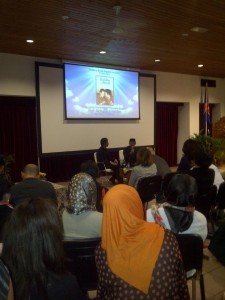 For the first time in Europe, the film Habie & Ainun was publicly screened in front of a large crowd. The film was screened in the hall of the Indonesian Embassy in The Hague, where around 300 people were anxious to see the film and meet Indonesia’s third president. After the screening, the head of the INYS in Indonesia, Achmad Adhitya, led a fruitful discussion between Pak B.J. Habibie and the audience. Pak Habibi shared intriguing personal stories and anecdotes which were received well by the massive crowd.