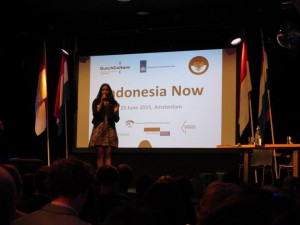 In the month of June, the Dutch branch of the Indonesia Nederland Youth Society organized a speaking competition. This was combined with a college tour held in Leiden, where Ms Dessy Irawati PhD FeRSA, Executive Consultant to BNI in the Netherlands, held an inspiring lecture about the relations between Indonesia and the Netherlands. Ms Irawati informed us on how we, as youth, as the new generation, as leaders of tomorrow, are able to influence this relationship. On this same event held at the Leiden University, the first round of the speaking competition took place. During this session, the participants were able to present their speech in front of a jury and received points of improvement in order for them to enhance their speech for the finals. Ms Irawati was one of the jury members, alongside Mr Felix Lomans Policy Officer Indonesia at the Dutch Ministry of Foreign Affairs, and our PR Officer Simone Grondsma. 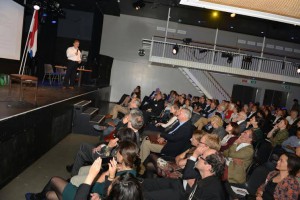 The contestants were offered a workshop at the Indonesian Embassy in the Hague in order to practice their speeches and receive more tips for improvement. The Indonesian contestants were supposed to deliver their speech in Dutch, while the Dutch contestants had to perform in Bahasa Indonesia. The workshop at the embassy was therefore quite useful as not only we from INYS and the embassy could provide help, but the contestants also helped each other. The process of building up towards the finals also showed how cooperation between the Dutch and Indonesian participants led to improving results, reflecting on how both parties could work together to combine forces. 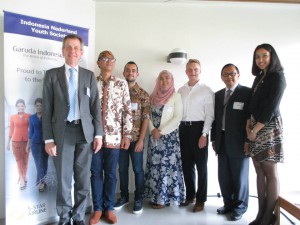 On June 25, the finals were held during the “Indonesia Now” seminar, organized by Dutch Culture. The audience seemed very much intrigued by the abilities of both Dutch as well as Indonesian contestants’ abilities to speak in such inspiring and powerful manner. Furthermore, it was great to see how the two nationalities were courageously delivering their speech in a foreign language. After a consultation by the judges, consisting of Mr Azis Nurwahyudi Counsellor of the Indonesian Embassy, Mr Hanjo Kuiper Deputy Head South Asia and Oceania at the Dutch Ministry of Foreign Affairs, and our vice-chair Dimple Sokartara, the two winners were announced. The Indonesian winner Fitria Gau then gave her speech once again during the plenary closing session of the seminar, followed by the Dutch winner Maik van Oudenaarden. The audience was moved by the speeches of our two winners as noticed from their reactions.

This way, we have created another step towards enhancing the bilateral relationship between Indonesia and the Netherlands from a youth-led perspective. In sum, it was a very inspiring, eye-opening, and joyful process where we all have learned more on how we can contribute to creating stronger ties between both countries. We aim to create more events in the future where we can pursue similar results.