‘Marlina the Murderer in Four Acts’ is the latest big film production from Indonesia, directed by Mouly Surya. CinemAsia gave INYS the opportunity to attend the official premiere in Rotterdam during the International Film Festival Rotterdam (IFFR) and interview Mouly Surya. We sent Sebastiaan Coops, secretary at INYS, and Joris Maas, photographer, to the premiere to conduct and capture the interview.

“We had just seen the film ‘Marlina the Murderer in Four Acts’, which premieres throughout the Netherlands on February 15. CinemAsia had invited two members of the INYS to join the official premiere at the IFFR in Rotterdam. I first saw Mouly in the Pathé foyer before the film started. She was talking to some people from CinemAsia and the IFFR. However, I was hesitant to introduce myself as she didn’t look like the big director I had in mind. She looked very casual as she mixed with the hosts. If there were people who flocked around someone, it was at the box office clerk to show their reservations. Like the group animal I am, I decided to do the same.

During the Q&A the first thing I noticed from her was her laugh, which is bigger than her posture. After some questions concerning the film, Joris and I had joined her in the lobby of the Stadsschouwburg across the square. We had a very pleasant conversation about realism in cinema before we finally set up everything to start the interview.”

First things first: is it Ibu Surya or Mouly Surya?

“Please don’t call me Ibu Surya, it’s a very polite term but it is also different from Mrs. or Miss. I would call someone Ibu when she is my mom.”

The first question I had after this screening concerns a very intriguing character: that of Franz. Every time there was a shocking event he was singing and I wonder: what was he singing?

“It is a local song from Sumba Island and it is very pop-ish: everyone knows it. When I made the script I decided that I wanted a song from the island but I didn’t know any Sumba song. When we got there a couple of weeks prior, preparing to start filming, I asked the local crew to give me a local song, a song that everyone knows. Even lullabies would have been ok by me. They gave me a lot of songs of which this is one of them: ‘Lahape Jodo’. HP is an abbreviation from mobile phone but Jodo means soul mates. I actually didn’t know what the song was about at that time because I don’t know Sumba language. Even some Sumba teenagers couldn’t speak it. It is a very old language. When I asked the writer of the song about the meaning, they only explained that the song is about someone who is in love with someone but can only contact each other by mobile phone. But it actually has nothing to do with the film. I love the fact that it has nothing to do with the film and that he just sings it as if he is missing someone. But because it doesn’t have anything to do with the film, it fits the film. Can you follow that?”

Sumba Island is very different from the rest of Indonesia. How is this contrast of Indonesian cinema culture and the remoteness of Sumba present in your film?

“I think that really, Indonesia has hundreds of cultures that are very different from each other. And I think it’s firstly the different religions. The religion of the Sumbanese is 80% Marapu and the rest is Roman Catholicism and a minor religion is Islam. That makes the island very different as well. It has a different  climate, it is extremely hot, which was very difficult for me. It is also more about ternah. The way they take care of animals. They are doing that instead of plantations, it is quite distinctive and almost like being in another country. It is very interesting how I can put these elements in the film.”

But your film is still an Indonesian film.

“It is still Indonesia, by law. But an important thing that we have in common is the language. Maybe you do understand some Indonesian? The local dialect probably threw you off from it. They talk very fast, that’s how people in the island speak. It’s so fast that I can’t understand the dialect myself. I wanted my actors to speak it and when they came and rehearsed it, I couldn’t understand a word! So I had to get used to it as well. But also important to Indonesianess are the values. For example, when you have your family grave in front of the house. Or the patriarchy as well. Sumba therefore has many connections to the rest of Indonesia. It is also the presence of the police station scene where they are talking about politics in a way in which the island is treated. However, the government is not always as strong as in other parts of Indonesia. It is also about the women in the bus and in Sumatra I have a lot of aunts like that. There is a strong characterisation in those aspects.”

How does your film relate to other Indonesian films?

“I wanted to do something unique compared to other Indonesian cinema. Because often when they make a film about the islands of Indonesia, they get away with not employing any gender elements but become documentary-ish. They try to portray the culture and characters as authentic as possible. I made a different and more universal approach by using much more relatable gender elements.”

How about the contrast of realism and magic in your film?

“The trend of the cinema is shifting. I think that I have never been making films that are very realistic. In my opinion, a film is never realistic because it’s still a perspective and everything is framed. You always leave out some parts. Whenever there is a camera there is never a reality.”

But the headless man in the film playing an instrument, is he there to remind the audience that they are watching a film?

“It’s not to remind them that it’s a film. Headless Markus (that’s his name in the script) changed something in Marlina. I wanted to have a visual something that shows the audience what happens to Marlina and I wanted to show something that supplies her with a feeling, it is a way to show the change to her life and it’s an envisionment of that.”

So how do you represent those feelings, changes, gender roles?

“There are a lot of elements in the film which is about representation. It’s more about the message that representation has of a certain viewpoint. It’s about to tell the story to the audience and the message I want to get across. I don’t want to become the champion of Indonesian women. I don’t want that pressure. That’s what I said in the beginning of the interview on how the film shifted the reality by putting gender elements in it, rather than becoming authentic and documentary-ish and make it more relatable and get a wider appeal. In the end, I don’t want to make too big a thing of being a woman. There are no differences between any man and me. We should be aware of that.” 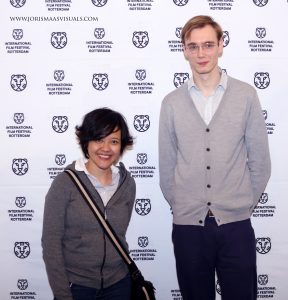 Pictures made by Joris Maas, please visit his website.