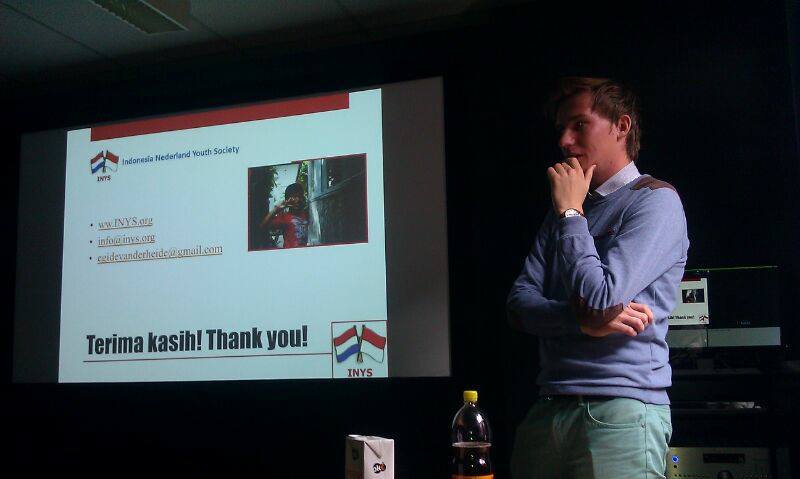 In cooperation with Plan Nederland and the HKU University of the Arts Utrecht, the INYS organized a pre-departure meeting for Media, Music Technology, Games & Interaction and Economic Art students from HKU who will travel to Indonesia in the context of the weCreate project and the Erasmus Huis International Documentary Film Festival , Erasmusindocs the coming months.

The meeting was organized in order to inform the students about the Indonesian behavior values and etiquettes. INYS devoted a presentation to this topic, in which cultural behavior of both countries was placed next to each other so that the differences and attention points became clear. Added with personal experience of the speaker is attempted to optimally inform the students about the social context they will end up in, when traveling to Indonesia.

The theme of the weCreate project is “Economic empowerment of adolescent girls”. The theme is in line with the Dutch government and with the YEE project in Indonesia. The name of the campaign is “The Road To Happiness”.

‘weCreate’  is a four-year Plan Netherland program in collaboration with Plan Ghana (201-2013), Plan Indonesia (2013-2015), MTV and HKU (University of Arts, Utrecht, The Netherlands). This project is signed in 2011 and has been organized in the last 2 years in Ghana. In July 2013 till June 2015 weCreate will continue in Indonesia.

Currently most of the Dutch youth are not much interested in developed issues, because they think the situation can only improve by giving money or they think they can not make any difference in developing countries. Because young people are the future supporters of Plan’s work and young people can make a difference; the department of ‘Global Citizenship’  of Plan Nederland aims to involve Dutch youth in international collaboration through educational and multi- media campaigns and lobby projects.  weCreate motivates young people to invest in equal rights for boys and girls through international collaboration.

In July 2013 the weCreate coordinator from Plan Netherlands and HKU will do an preliminary visit to Indonesia in order to build up the collaboration between Plan NL and Plan Indonesia and to prepare the first youth exchange.

The strategy of weCreate is to organize several meaningful youth exchanges between Dutch and Indonesia youth, which form the basis for an international peer-created campaigns in the Netherlands. We work together with Media, Music Technology, Games & Interaction and Economic Art students from HKU and Plan volunteers in the Netherlands and youth groups in Indonesia in order to reach a large group of young people in the Netherlands.

During the exchange visits of the HKU students (10 students for 4 weeks in October 2013 and 2014) and Plan volunteers (3 youth+ Plan staff for 10 days in late April/May 2014 and 2015), the youth will interact with the local youth groups supported by Plan. The local youth groups will show the Dutch youth their realities regarding gender inequalities, show them around and introduce them within their communities. All the youth will gain understanding on the realities, mirroring this to their own situation and share their realities and experiences with the local youth groups and communities. The HKU students will collect input in order to develop a multi- media campaign. The Dutch Plan volunteers will use their experience to organise different activities/ events in the Netherlands to attract a large group of young people and policy makers in the Netherlands.

The Road To Happiness

The theme of the weCreate project is “Economic empowerment of adolescent girls”. The theme is in line with the Dutch government and with the YEE project in Indonesia. The name of the campaign is ‘The Road To Happiness”. Youth around the world are searching for their happiness, but the circumstance in developing countries does not lead to the happiness young people deserve. The title also linked to the migration within countries; a lot of young woman leave the rural area to a bigger city looking for a job and a better future. In most cases they end up living on the streets. The media products that are developed in 2011-2013 are online on www.mtv.nl/plan and www.vimeo.com/plannederland