The event started at 14:00 with Session 1: Opening. Founder and President of the INYS Rennie Roos gave a speech in which he briefly explained the origin of the INYS and how his idea gradually formed into what it is today. He also took the time to introduce and thank all who had helped him, making it not only ‘his’ INYS but ‘our’ INYS.

Next were the welcoming remarks by Mr. Witjaksono Adji, Mrs. Marissa Gerards and a video message from the Indonesian Ambassador H.E. Retno Marsudi. All three have great expectations of the INYS and they hailed the goals that the INYS has set for itself. The ambassador also added that the foundation of the INYS is very timely, now is the time for the Netherlands and Indonesia to come closer together and work for a better future, what better place to start than with the young generation?

With the beating of the gong by Mr. Witjaksono Adji and Mrs. Marissa Gerards the INYS had been officially launched.

The event had several cultural performances incorporated into its programme. The first was a song by Dyah Purwitasari from the Australian Suara Indonesia dance group.

Later in this session dance group Leine Roebana, a group of young men and women who mix Western and Indonesian dance styles performed a piece out of their current show, Ghost Track.

After the first session there was a short break with snacks and drinks, donated by the Dutch Ministry of Foreign Affairs.

The breaks had a dual function. Besides the normal function of giving people a little time to rest in between sessions, people were also given the chance to interact with each other and expand their network. The INYS encouraged this by giving everyone a nametag and a colour code, the different colours referred to whether you were Indonesian, Dutch, student, young professional or otherwise. Everybody was encouraged to mingle and talk to people they had not met before.

Session 2 started with a classical Javanese dance by Jilly Knol (Miss Indonesisch 2013), this was followed by some educational presentations. The first one by Ms. Ina Tjandrakesuma, senior lecturer of Trade Management Asia (TMA) at Rotterdam University of Applied Sciences (HR). She spoke about what TMA offered to its students and invited Egide van der Heide, a current student of TMA, to relate his personal experiences with the study.

Next was Professor David Henley from Leiden University. He primarily talked about the growing chances and opportunities in South and Southeast Asia, again referring to the timeliness of the INYS.

Suzanne Kormeling of the NUFFIC was the next speaker, and she spoke about the Holland Alumni Network and the work that the NUFFIC does for Dutch and international students. She had some good tips and hints for the students present.

Mira Sumanti served as the role model for the day. She is an Indonesian graduate from the HHS and now has a successful career at Adidas in the Netherlands. Her personal story was very inspiring to hear. 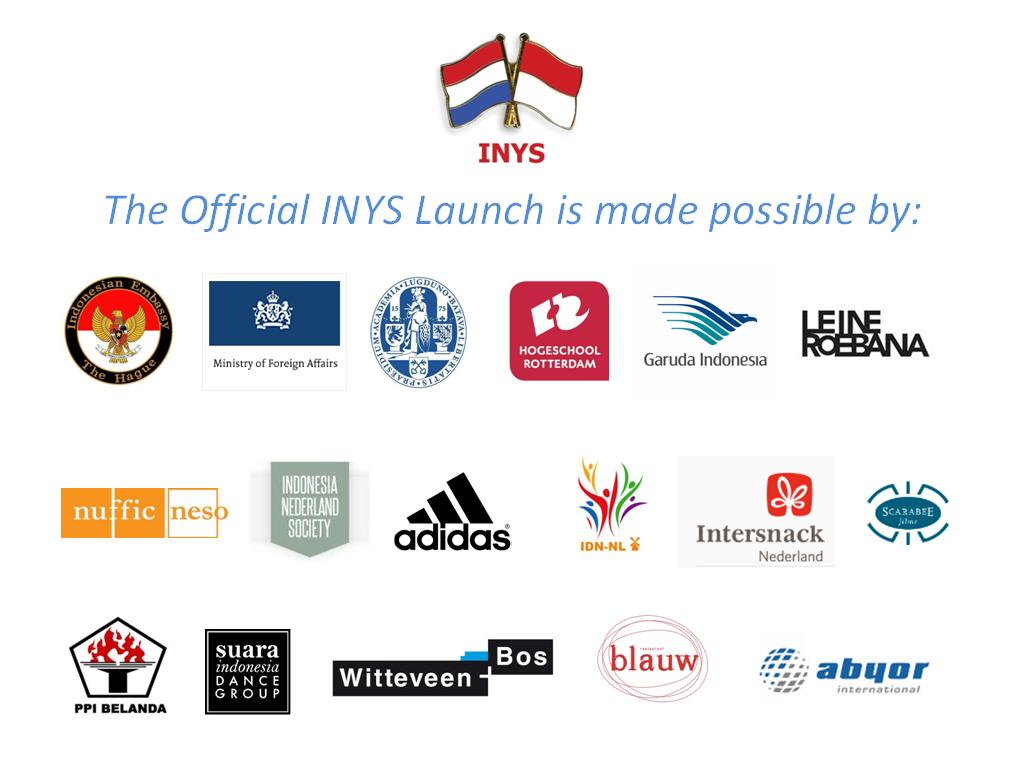 After a short break the programme was continued with the introduction of the INYS Buddy Language Program. The idea of the Language Buddy Program is to bring together Dutch and Indonesian youth in order to make them learn about each other’s culture and language. The programme was enthusiastically received.

The next item was the Raise the Flag Quiz, Rennie Roos and Willy Sakareza (Secretary-General of PPI Belanda) both asked several questions about the Netherlands and Indonesia. The questions turned out to be a bit too easy, but that did not spoil the fun as there were many moments when laughter was abound.

Before the business part of Session 3 began, Manuela Biesheuvel left the audience stunned by performing her spectacular cultural Fusion dance.

There were four companies (two Dutch, two Indonesian) that gave a presentation. The floor was first given to Mr. Latif Gau, Director of PT Abyor Europe, an Indonesian IT business who has recently opened a Dutch branch. The key message of his presentation was that the Netherlands should invest more in Indonesian IT, for that is still a mostly untapped but emerging and promising market.

The second presentation was by Ms. Wati Chaeron from Emic Research and the Indonesia Diaspora Network NL. Her company aims to consult people and businesses on how best to deal with cultural differences between East and West.

Garuda Indonesia was represented by Ms. Angel Lam, who gave a presentation on the mission and vision of Garuda and announced that INYS members would be eligible for a small discount and extra luggage when flying with Garuda. We thank Garuda for this offer.

Last presentation was from Mr. Leon Valkenburg who works for Witteveen + Bos, a Dutch company that is involved in the sea wall project that is to improve Jakarta’s sea defences.

To celebrate the inauguration, a lottery was held with many prizes to win. Throughout the day guests could buy tickets for only 1 euro or they could make a donation for the INYS. With giving a donation of more than 5 euros, guests also received a pin with the logo of the INYS. The lottery turned out to be a great success. There were a lot of prizes ranging from goody bags to free tickets for the Leine Roebana dance show. The day ended with a dinner provided by the Indonesian Embassy. At the doors, the leaving guests were handed a gift bag with flyers and gadgets from all of the companies and organisations that had helped the INYS in creating this event.